THE ORIGIN OF “BLOOD LINE”

Like many people, I have become absorbed in finding my genealogical roots. Conversations only half remembered with my mother gave me a start at tracing long gone aunts and uncles and great grandparents.  As did my mother’s family’s Bible which gives birth, death and marriage dates for at least that part of my family back to the 1880s.  Online census and other records added more data.  But when you’re black, you inevitably hit a wall – the Iron Curtain of slavery, where black people had no more identity than the livestock.   I decided to channel my emotions about what I found and what I couldn’t find into an artwork that I call “Blood Line.” 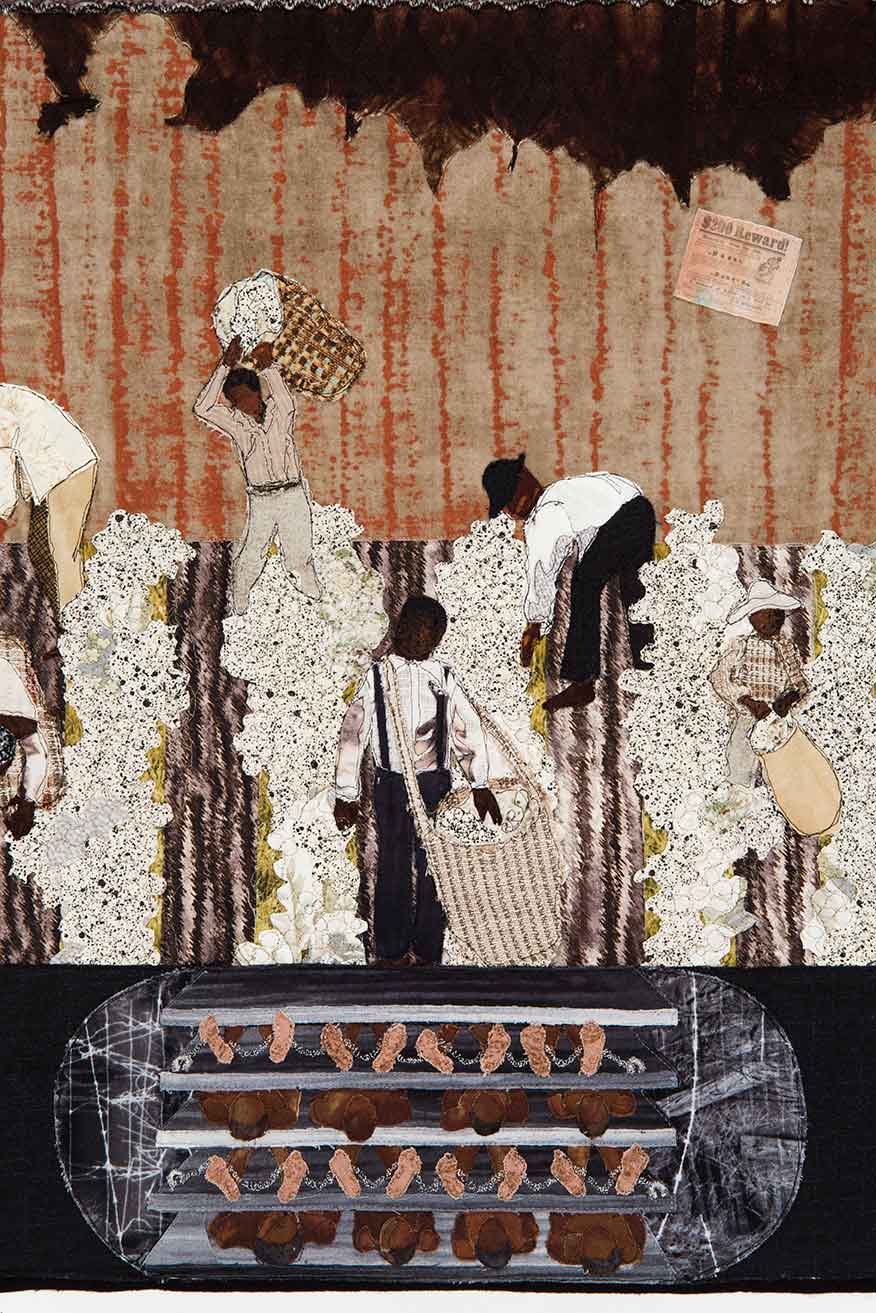 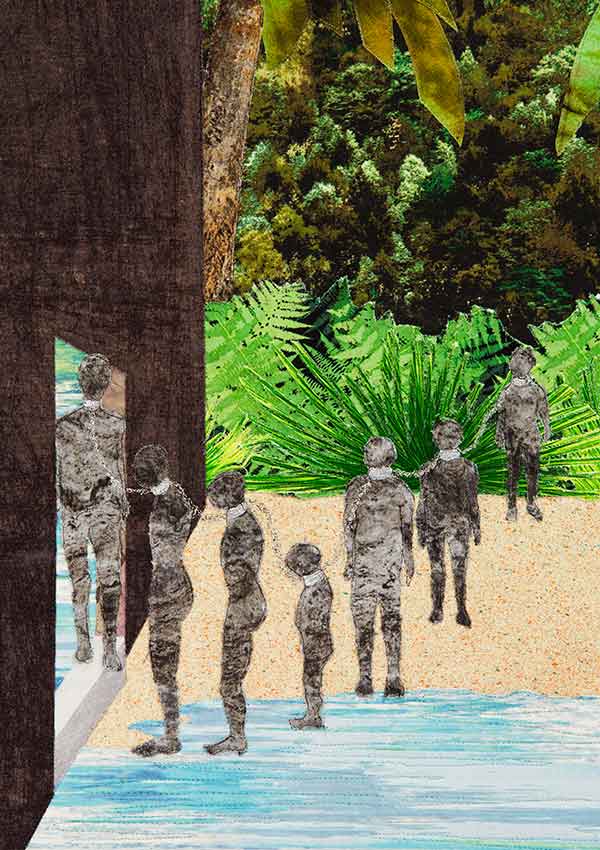 “Blood Line,” Detail from first car (Africa)
To tell this story I used the metaphor of a train trip (a vehicle moving inexorably through time, picking up people in one place and depositing them in another).   This triptych tells the story of the passage of my ancestors from freedom to slavery and into the present; a journey that inevitably ends in me, an observer of my own past recording the scene on my cell phone.  It bears witness to those left behind to mourn in Africa, to the inhumanity of the Middle Passage whose human cargo was stacked like wood on slave ships; to 245 years of forced slave labor, the uncompensated cornerstone of American prosperity.  Finally, in the lead car by using the faces of my actual relatives (great grandparents, aunts, uncles, parents, etc.) I recreate my family as passengers in our second Great Migration out of the Jim Crow south in search of the illusive promise of America.
I am honored that “Blood Line” will have its initial showing at the Textile Museum in Washington, D.C. as part of an exhibition called “Stories of Migration: Contemporary Artists Interpret Diaspora” April 16 through September 4, 2016.

OTHER STORIES OF PASSAGE

In addition to “Blood Line”, the Textile Museum will have available for sale during the period of the exhibition,
small companion pieces that I created that tell individual stories of passage of some of my family members. 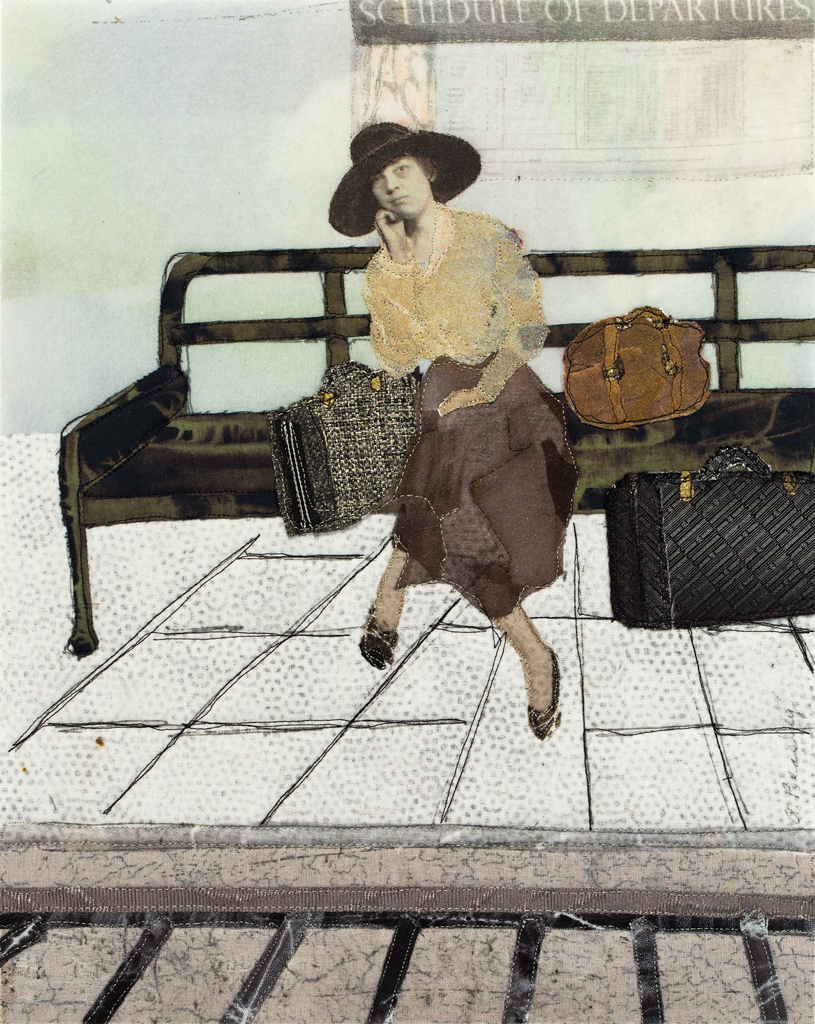 My great aunt Azalea (who my mother called “Aunt C” because she couldn’t say “Z”) shown leaving her home in Memphis to settle in Detroit, circa 1915.  My mother’s family were early entrants in the Great Migration from the Jim Crow South in search of a new freedom in the North.

“Back of the Bus”
Like a lot of young black men, my Uncle Dan (shown sitting) saw service as a soldier in World War II which opened his eyes to a world outside of the Jim Crow south. When he came back home to Tuskegee, Alabama in 1945 he began trying to register to vote. As he explained, “I was a college graduate. I had been in the army … I had never been in jail… I just figured I ought to be registered.” Every conceivable roadblock was thrown in front of these early civil rights activists. It would take another 20 years before the white wall of subterfuge, intimidation and violence began to crumble to allow blacks access to the ballot box. Finally in 1970, Uncle Dan became the first black person since Reconstruction elected to public office in Macon County, Alabama. 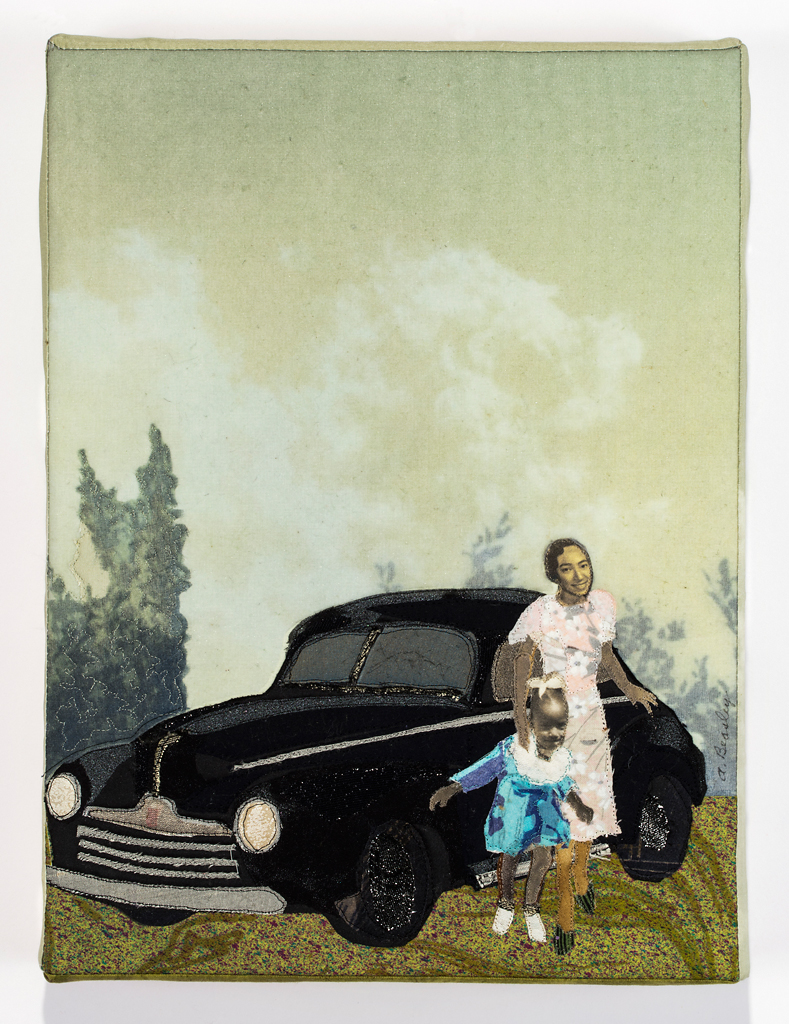 “Mama, Me and the ’41 Ford”
My mother’s migration story was more complicated than some. As a baby she moved from Memphis to Detroit with her parents, sister, aunts and uncles. She grew up in Detroit but when the Depression came she took a job with the VA Hospital in Tuskegee, Alabama. This hospital was constructed in 1923 with the purpose of providing care for the black veterans of World War I; care denied them at most other veteran facilities in the Jim Crow South. But because it was segregated, it also provided a harbor of employment for black professionals such as doctors and nurses. Along with the Tuskegee Institute, founded by Booker T. Washington in 1881, Tuskegee came to be seen as a mecca of black achievement. My parents met at the VA; married and had two children there in Tuskegee. Four years after I was born, we all climbed into this 1941 Ford and headed north to live in my mother’s hometown, Detroit, migrants once again.

“The Wedding Bells”
This page reproduced from our family Bible marks the marriage of my great grandfather, Harry Bell to Ida Morton, my great grandmother. They are shown as they might have been on their wedding day. 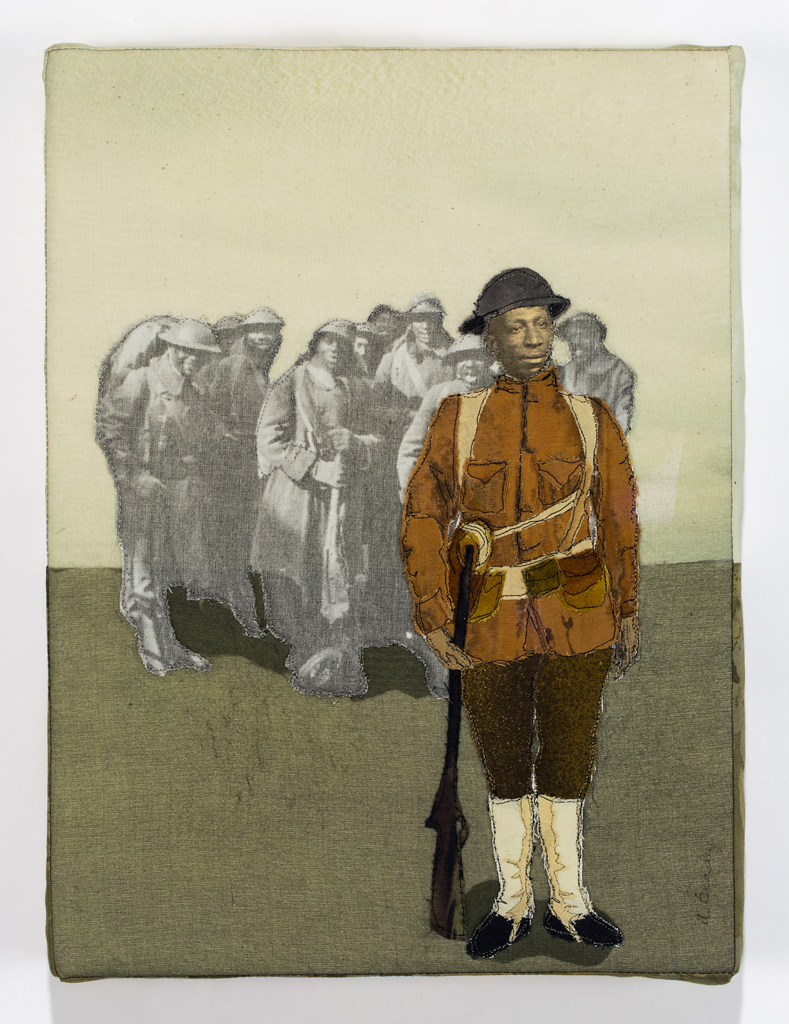 “Doughboy”
My great uncle Edgar Edmund as a World War I soldier. During World War I, one million African Americans (Including Edgar) received draft notices and some 370,000 were inducted into the army. These returning soldiers having seen a vision of a life outside of the color bar, were the initial impetus for the Great Migration of African Americans out of the Jim Crow South.